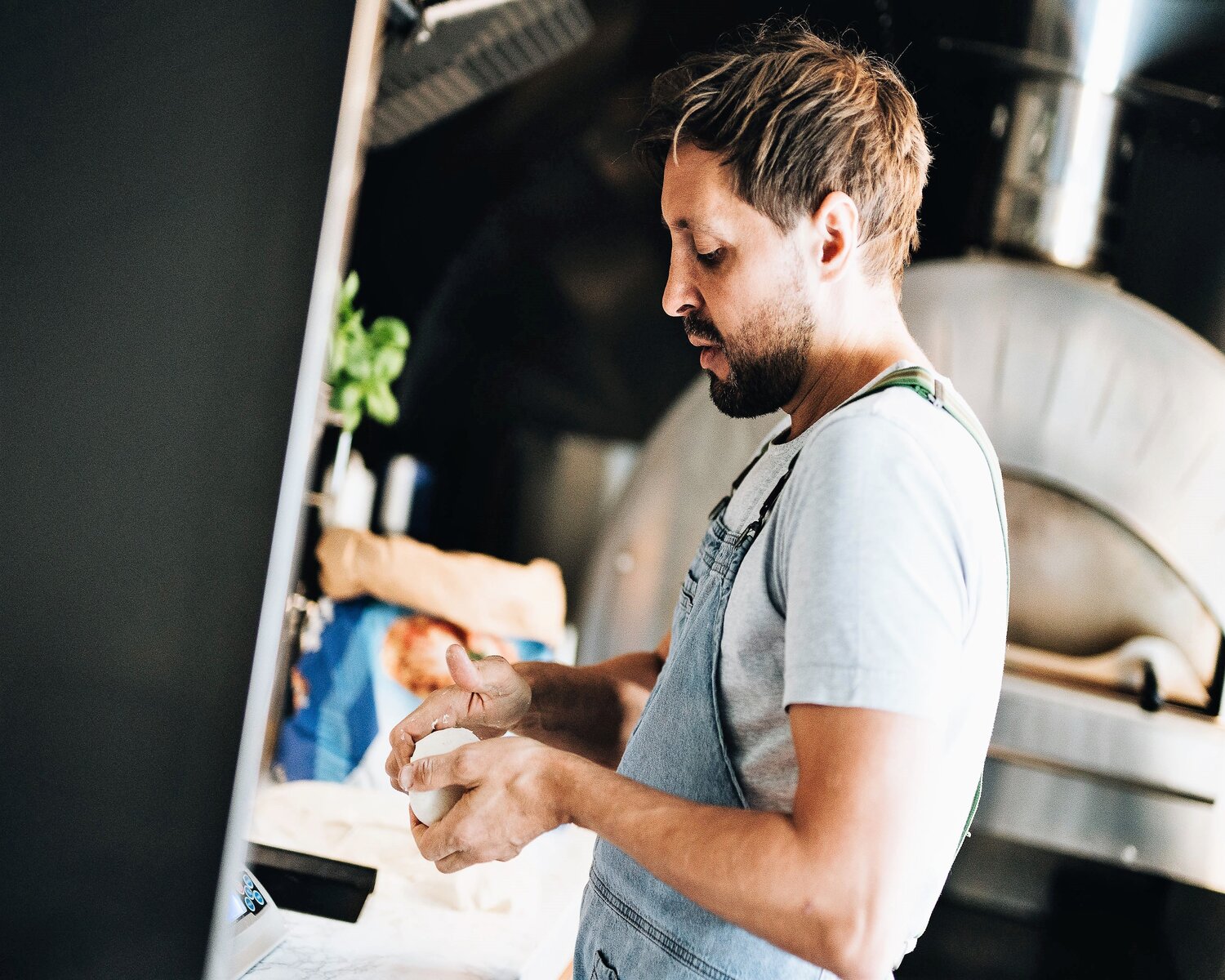 A SOURDOUGH pizza business launched in lockdown by a former Queen’s Nurse and university lecturer is cooking up a storm with customers.

a pesto wood-fired sourdough pizza company has quickly grown to become one of the most popular takeaway venues in North Wales.

Based out of a street-food Airstream trailer at the Dolphin Inn, Mold, owner and pizzaiolo (pizza chef) Stephen Thorp opened for the first time in March, as the Coronavirus pandemic took hold in the UK.

Stephen is an expert in public health having lectured and published academic texts on the subject, so ensuring the safety of diners and his four-strong team of staff was paramount.

And so is quality; a pesto’s blend of authentic Italian flavours and customer service has resulted in a five-star rating on TripAdvisor and Google, as well as social media plaudits.

Demand is so high that people are being asked to order in advance – the new app is now live – and in a single four-hour weekend session they have been known to bake more than 150 pizzas.

Admitting their success took him by surprise initially, the 35 year-old is passionate about sustainable eating, proud to be a plastic-free business and says around 40% of the products they sell are vegan.

“I was advised when I told people about what I was planning to do that it risky and even crazy, which is probably why you’re hard-pressed to find authentic, freshly prepared sourdough  pizza anywhere in this region,” said Stephen, from Cadole, near Loggerheads Country Park.

“The dough is complex to work with and is a living, breathing thing. Sourdough is a swampy pot of lactic acid bacteria and wild yeasts, which rely on their baker to control the conditions in which it lives, but that challenge is part of the reason I enjoy doing it and why it’s so loved by everyone who tries it.

“That is our biggest selling point; the unique flavours and ingredients we use has drawn people in and given them something different at a time when we all need something to put a smile on our faces.”

He added: “a pesto has an identity, that traditional Neapolitan influence mixed with Welsh pride has allowed us to stand out.

“I have even named the white and rye sourdoughs we make after my late grandparents, Glyn and Doreen, as it is synonymous with sourdough baking to name each culture.”

Stephen’s journey to the world of mozzarella and margheritas came after he began to struggle with exhaustion and mental health issues.

Advised to find a new focus, something that would help him de-stress, Stephen began to develop his love of sourdough, igniting a passion inside him.

He decided to leave behind education – despite being nominated for the Royal College of Nursing Teacher of the Year Award in 2019 – to follow his dream.

A masterclass with multi-award winning pizza chef Marco Fuso followed, and after time spent working on branding, experimenting and making and sourcing the best ingredients available – vegan mock duck is among the best sellers – Stephen was ready to fire up the oven.

“I had procrastinated for some time about turning my interest and passion for sourdough and pizza into a business, and when I began to experience ‘burn out’ while teaching, I found working with sourdough to be therapeutic and great for the mind. It offered me a real focus,” he said.

“But I didn’t think a pesto would be as popular as it has become. I suppose customers have come to appreciate the love I put into my pizza and appreciate what good quality ingredients taste like.

“Our tomatoes are often talked about, as they are fresh and actually taste like tomatoes! How many of us buy tomatoes these days which are bursting with flavour?

“Many of our ingredients are sourced from across Britain. Our vegan pepperoni comes from a small supplier in Scotland and our Shiitake mushrooms are grown by British mushroom farmers. But there are some ingredients I have to source from Italy, such as our superior grade Neapolitan flour, Nduja and mozzarella as they are baked with great, authentic flavour.”

Stephen added: “I had considered growing into a bricks and mortar operation but I think it’s more likely I’ll buy another trailer and recruit more pizza chefs, especially as we’ve had requests to attend weddings, events and festivals from next summer.

“We have to expand because it’s impossible with one trailer to do all the things people are asking us to do, and I don’t want to let anyone down.

“We are so fortunate and appreciative of the many loyal friends who return to us again and again and will never take that for granted.

“We are in a wonderful part of the world and have had a brilliant start despite all of the doom and gloom in the world – long may that continue.”