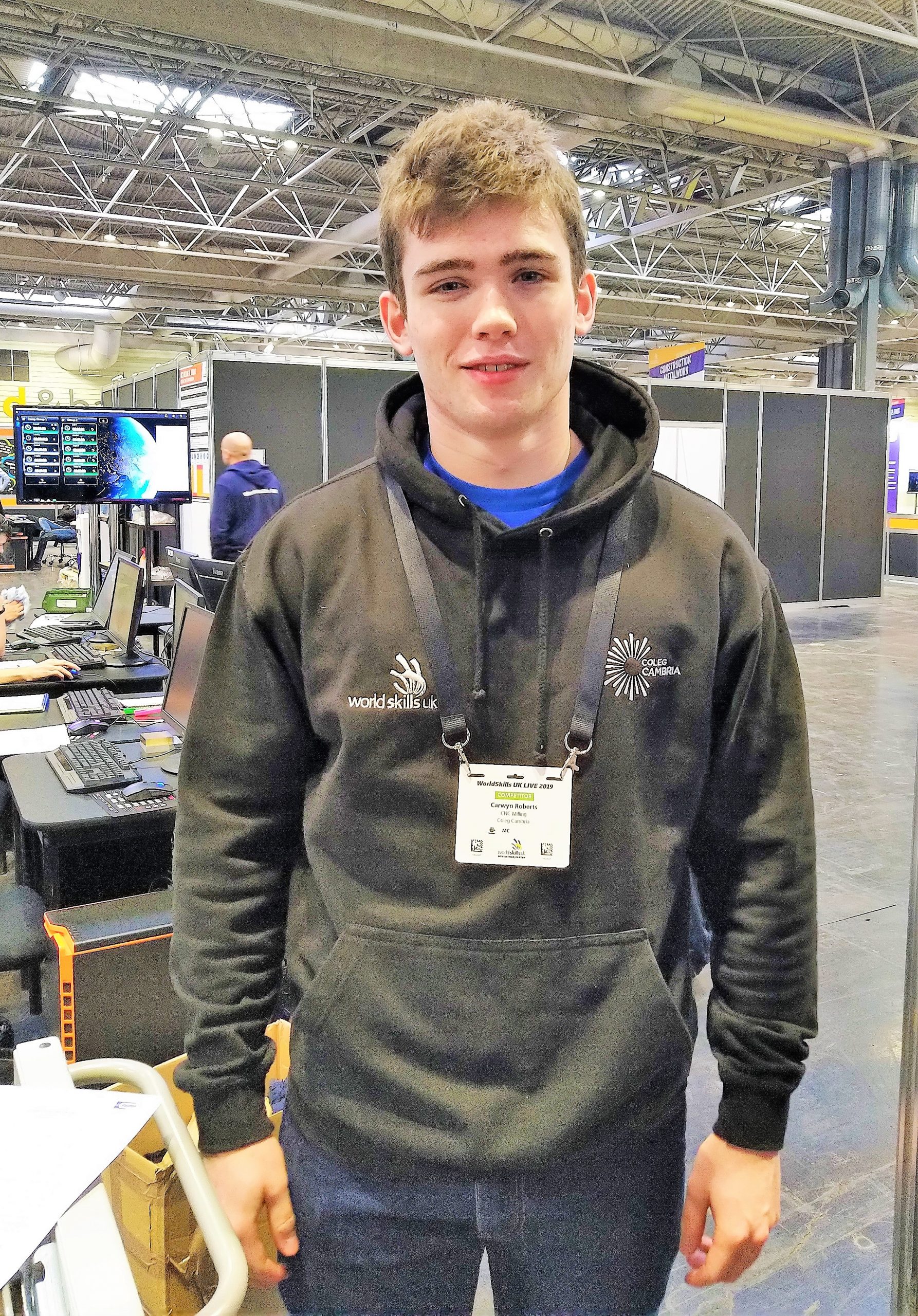 A COLEG CAMBRIA apprentice has picked up one of the most prestigious prizes in work-based learning.

Carwyn Roberts, from Trefnant, was given the Engineering Apprentice Final Year Award at the Make UK Wales virtual ceremony, sponsored by Sony TEC.

A CNC Machining Apprentice at the Airbus wing-making factory in Broughton, and learner at the college’s Bersham Road site in Wrexham, Carwyn was commended for his “willingness to take on new tasks” and a strong work ethic.

The 21 year-old is in his final year with Cambria – the apprenticeship was extended due to the Covid-19 pandemic – and thanked lecturers for their support.

“It is a great honour and was quite a shock,” said the former pupil at Ysgol Glan Clwyd, St Asaph.

“I look forward to completing my apprenticeship with Cambria and hope to go on to have a career in the aerospace sector. Thanks to Adam Youens and the team at the college for putting me forward, it’s a nice surprise.”

Judges said: “Carwyn completed his NVQ in record time which is due to his drive and determination to advance within the sector. We’re keen to keep an eye on Carwyn and can see him leading a business in the not so distant future.”

Janis Richards, Region Director for Make UK in Wales, added: “These awards are a testament to the dynamic companies and individuals working within engineering and manufacturing.

“The sector has been at the heart of delivering during the crisis and as we re-build our economy there will be a bright future for companies and individuals that make the most of their talent.”

Carwyn will now go forward to the national finals to compete against other regional winners across the UK.

Last year, he picked up a silver medal at the WorldSkills UK Live finals in Birmingham and was selected for the Long Squad to represent the country in CNC Milling at WorldSkills in Shanghai, known as the Skills Olympics.

Cambria Engineering lecturer and WorldSkills UK Training Manager Adam Youens congratulated him on his success, and said: “I have mentored Carwyn in CNC Milling over the last couple of years and have always been impressed by his ability, attitude and hard work,” said Adam.

“He thoroughly deserves this prize and is always willing to go the extra mile in learning new skills as an engineer.

“Carwyn is a model apprentice and a great role model for all of the students at Bersham Road – we wish him the best of luck for his future career and the rest of his time with us at Coleg Cambria.”

“Apprentices play a huge role in our industry and we are proud to recognise the next generation who will drive forward our sector towards a bright future.

“We would like to congratulate all of the winners for their well-deserved achievements and dedication to the profession.”

Visit www.cambria.ac.uk for more on the wide range of apprenticeships and courses available at Coleg Cambria.